Abduction Of Corps Members By Some Hoodlums

This morning, the Management of the National Youth Service Corps received a disturbing report that some Corps Members serving in Akwaibom State, deployed to electoral duties in respect of House of Representative and Senatorial Elections were abducted at gunpoint by some political thugs after they had collected some sensitive materials meant for their assignments. See also: Evasion Of 2019 Batch C Service Year And Its Legal Implications

Regrettably, the hoodlums seized their mobile phones in order to foreclose any communication with the NYSC Distress Call Centre, or security agencies for rescue operation.

Notwithstanding the apparent threat to their lives, the abductees refused to do the obnoxious bidding of the political thugs.

Therefore, the Scheme wishes to salute the Corps Members for the rare display of courage, patriotism, integrity, discipline and team spirit which are the hallmarks of the National Youth Service Corps. See also: Cobbler Rapes Corper, Attempts To Murder Her, Shares Nude Video With Friends

However, just like Management has always admonished, in the face of danger, particularly that occasioned by electoral malpractices, Corps Members are strongly advised to secure their lives first, even if it means playing along before any other consideration; and subsequently make a detailed report thereof.

Gratifyingly, as at the time of going to the press, all the abducted Corps Members have been released unhurt and the political thugs numbering 79 rounded up by security agencies.

While urging the parents and relatives of the Corps Members to remain calm as the situation is under control, Management wishes to appeal to the political gladiators cutting across political parties in the country to eschew the politics of bitterness and desperation which most often than not put Corps Members who have been called up for Service by the Nation on collision course with thugs.

Management hastens to reiterate that Corps Members are non-partisan, and shall always remain loyal to the Nation in the discharge of their duties. The Scheme shall continue to place high premium on their security in collaboration with all the security agencies in the country.

This is Lola Princess and I'm from Earth. Born somewhere in Osun State, raised in Lagos, based in Lagos. Love making friends and blogging. I'm your NYSC Google Assistant and I'm always here.
@nysc_news
Previous NYSC Portal Now Open For Remobilization – Act Now
Next 10 Facts All NYSC Batch A 2020 PCM Must Know 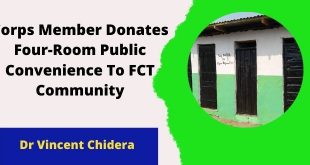