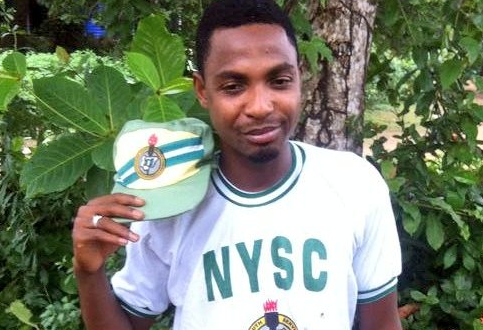 A Business Administration Graduate, Mr. Abul FadI Abbas, who was a serving Corp member have been buried amidst tears.

He was killed during the October 29th clash between Islamic group, Shiites and the Nigerian Army in Abuja.

The Nigerian Army admitted its personnel killed at least three persons, after firing live ammunition at Shiite protesters, who allegedly tried to breach a security checkpoint, on the outskirts of Abuja on a fateful day.

The violence which broke out in Karu, a densely populated suburb of the nation’s capital, gripped Abuja and its environs, with vehicular and human movements in and out of the axis virtually grounded for the rest of the day.

Many with various degrees of injuries were later confirmed dead after the clash.

Nigeriancablenewsonline.com however later gathered that over 20 people were killed in the clash. Please drop your condolences and SHARE to PAY Respect to him. May Your Obituary never be sent home to your Parents.

This is Lola Princess and I'm from Earth. Born somewhere in Osun State, raised in Lagos, based in Lagos. Love making friends and blogging. I'm your NYSC Google Assistant and I'm always here.
@nysc_news
Previous How To Earn Money From Facebook – 100% Tested & Working Complete Guide
Next Three Yahoo Boys Arrested After Attempting To Use Girlfriends For Ritual