7 Best CDS Groups To Join As A Corp Member

NYSC is a phase every Nigerian graduate must undergo before proceeding to the Labour Market. Especially, graduates who are less than 30 years. As a matter of fact, participation in the National Youth Service Scheme is compulsory for any Nigerian graduate who wishes to work in Nigeria. However, this article will focus on the best CDS groups to join as a corp member.

The community development service (CDS) is one of the cardinal programmes of NYSC. The other three are; Orientation programme, Place of primary assignment and passing out parade.

Sometimes, the CDS you belong to during your service year can develop you professionally. This is why we have come up with this list of 7 best CDS group to join as a corp member.

Top 7 Best CDS Groups To Join As A Corp Member

NDLEA is one of the best CDS groups to join as a corp member. Outside of the fact that you will learn more from the group, you will definitely have the opportunity to sensitize people on the negative effect of hard drugs.

EFCC is also a top-notch CDS group to belong during your NYSC. Consider yourself very lucky if you are in this CDS. Corp members in this group always campaign against corruption.

Most times, they go to schools to sensitize them on the negative effect of corruption in the society. It is a very educative CDS that corp members will actually learn a lot from.

This is also among the best CDS groups to join as a corp member. However, corp members with medical background are often posted to this group since it is health related.

They constantly engage in health outreach, administration of first aid and more importantly setting up clinics for the NYSC secretariat.


HIV/AIDS is obviously one of the best CDS groups to join as a corp member. They constantly sensitize the general public on HIV and other STDs. Also, they establish Peer Education Trainers (PET) in schools.

NEMA is another amazing CDS group to join as a corp member. Members of this group aids in disaster management. The experience and knowledge you will get in this group will help you throughout your lifetime.

This is the media group of NYSC. The CDS group are called OBS in camp. They do the Radio, TV, and publications. Therefore, if you ever dream of becoming a presenter or writer, this is definitely a CDS group for you.

Members of this CDS group are the ones publishing corpers’ monthly magazine as well as the end of service yearbook.

I am Lola Princess and am from Earth. I am from somewhere in Osun State, raised in Lagos, based in Lagos. I love making friends and blogging. Am your NYSC Google Assistant and am always here.
@nysc_news
Previous NYSC DG Finally Speaks On Increment In Corps Members’ Allowance
Next Ebonyi To Pay Corpers N10,000 Allowances From September 2018

55 Things NYSC Members Should Not Leave Home Without 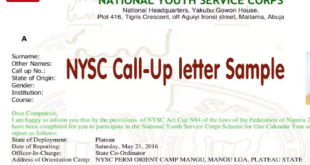 NYSC Call Up Letter Sample – The Picture And Vital Details

10 Things To Expect On NYSC Call up Letter Printing Day