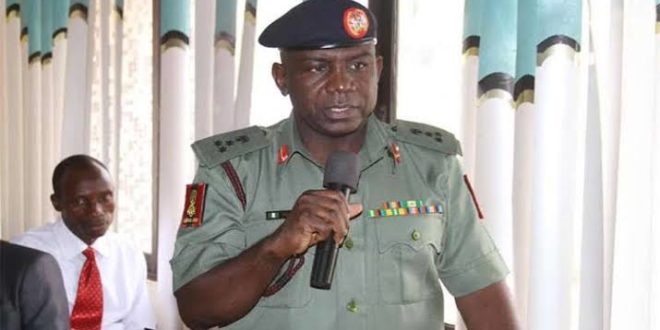 Speaking during the visit, Kazaure, who also visited the Director, Department of State Services in Oyo State, Mr. Abel Achi, said he was on an advocacy and sensitisation tour of corps members’ locations in preparation for the general elections. See also: Servicom To Synergise With NYSC In Kano For Quality Service

He said that the visit was also to discuss corps members’ safety during and after the elections.

“ The 2019 elections are near, some corps members will work as INEC ad-hoc officers, we want to ensure that they are adequately secured during and after the elections.

“We thank the army, other security operatives for the cordial relationship we have shared with them, we hope the good relationship continues,” he said.

He stressed that corps members would not be deployed to areas that wre not adequately secured.

Azinta, in his response, noted that the NYSC remains an important scheme in Nigeria as it binds the country together.

He underscored the need for everything to be done for the scheme to succeed. See also: NYSC Official Vision And Mission

Azinta gave an assurance that he would do his best to ensure adequate security for corps members under his command during and after the elections.

“We will do everything possible to make sure that they are protected, the corps members deployed to work in different areas will be given the phone numbers of our security officers assigned to the area.

“We will also ensure that the elections are violence- free, so people should not fear, they should come out and vote because there will be peace,” he said.

Azinta further urged the NYSC management to also discuss with traditional rulers, representatives of political parties and other relevant stakeholders on the safety of corps members.

Achi also promised that his command and the NYSC would continue to be partners in progress, adding that the safety of corps members was the military’s priority.

“We don’t take them for granted in any way, we will not only provide security for the corps members alone but also for NYSC staff.

“We have adequate security measures for their safety during the elections,” he said.

This is Lola Princess and I'm from Earth. Born somewhere in Osun State, raised in Lagos, based in Lagos. Love making friends and blogging. I'm your NYSC Google Assistant and I'm always here.
@nysc_news
Previous Servicom To Synergise With NYSC In Kano For Quality Service
Next NYSC To Prosecute Any Corps Member Involved In Election Malpractice