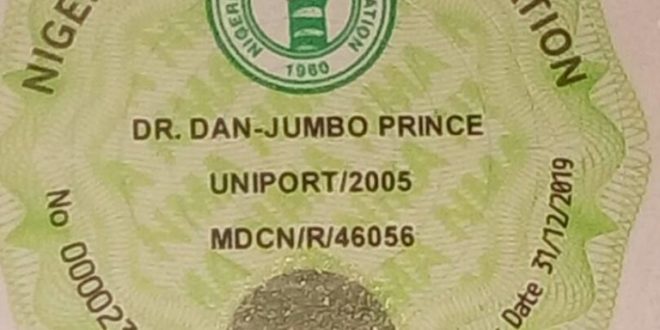 The NYSC medical certificate is a mandatory document every Prospective Corps Members Must present as an evidence that they are medically fit for NYSC. The idea was given birth to a couple of years ago when Corps members were falling sick and dieing during the orientation camp.

Before now, it has been just the medical certificate from a government hospital. However, the NYSC official management added an important information a few hours ago.

This is to inform all Prospective Corps Members including serving Corps Members that henceforth medical fitness/medical report submitted to NYSC must be affixed with Nigeria Medical Association (NMA) stamp. This is to authenticate the reports and curb quackery.
You are all advised to strictly comply with this directive.
Thank you.
Signed:
Management.

Let me tell you a little more about the NMA Stamp.

A report by NAN

The Nigerian Medical Association says doctors will commence full use of doctors’ stamp with effect from April 1 to curb quackery in the medical profession.

The president of the association, Prof. Mike Ogirima, disclosed this in an interview with the News Agency of Nigeria on Saturday in Abuja.

Ogirima frowned at the rate of quackery in medical profession, which had increased disease burden and mortality rate.

He explained that some security features embedded in the stamp include full name of the doctor, the institution he qualified from and the year.

Ogirima added that any doctor that does not possess or have the stamp latest April 1 would be regarded as a quack.

According to him, from April 1, any medical legal documents emanating from qualified doctors must contain the concerned doctors’ stamp.

“The implication of the stamp is that if you are practising as a medical doctor and do not have the stamp, you are a quack.

“With effect from April 1, we expect all documents emanating from doctors all over the country to bear doctor’s stamp and they should start using it on all medical legal documents.


“The rate of fake practitioners in medical field is on the high side, so through the use of the doctors’ stamp, we will be able to curb the menace,’’ he said.

Ogirima said in 2017, about 30 cases of fictitious medical reports were discovered at the NYSC camp, which was not healthy for the profession and the nation at large

He, however, called on perpetrators of this act to desist from it in order to restore dignity to the medical profession and boost patients’ confidence in the nation’s health sector.

55 Things NYSC Members Should Not Leave Home Without

NYSC Call Up Letter Sample – The Picture And Vital Details

10 Things To Expect On NYSC Call up Letter Printing Day