ICPC Chairman To Inaugurate Anti-Corruption And Transparency Unit In NYSC

The Chairman, Independent Corrupt Practices and Other Related Offences Commission, Professor Bolaji Owasanoye has said plans are underway to inaugurate Anti-Corruption and Transparency Unit in NYSC.

He stated this today while playing host to NYSC Director-General, Brigadier General Shuaibu Ibrahim in his office in Abuja.

Owasanoye said ACTU has the mandate to educate public servants on the dangers of corruption and guard against its practice.

The Chairman, who described NYSC as a friendly institution urged Corps Members to assist the commission in it’s crusade against corruption in order to safeguard their future.

He added that ACTU is important because it serves as the commission’s watchdog in every organisation.

“NYSC is very important for young people and it is a critical stakeholder in ICPC mandate. Corruption has stolen the jobs, opportunities and future of many Nigerians”, Owasanoye added.

Earlier, the DG, Brigadier General Shuaibu Ibrahim appealed for assistance from ICPC in combating the challenges being encountered in the mobilisation of Corps Members in order to streamline the mobilisation process in line with NYSC Act.

The DG also promised the readiness of the Scheme in supporting the fight against corruption in the country.

The NYSC/ICPC collaboration dates back to 2003 with the involvement of Corps Members in public enlightenment against corruption.

I am from Osun state on Earth, studied Philosophy at Obafemi Awolowo University Ile-Ife. I am a blogger, an SEO analyst, a Digital/Social media Marketing Guru, a Youtuber, a web designer and also into film production. I like movies, writing and making movies. Aspiring to become a Nollywood Writer and Director.
@corpersforum24
Previous NYSC Stream II Postponement – Blessing Or Curse?
Next Why Is It Challenging For Corpers To Save N10k From N19,800 Allawee? 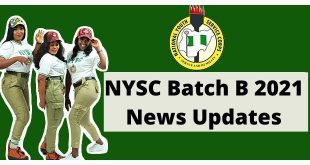