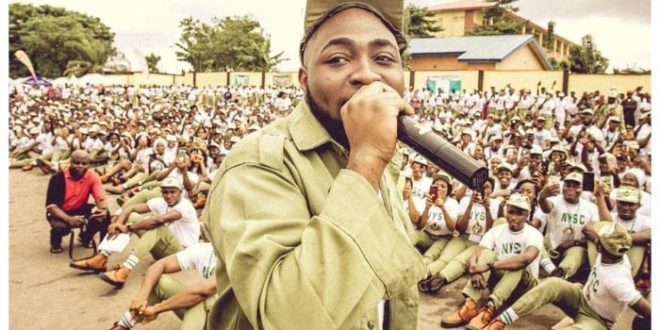 Davido is a serving corps member and should abide by the rules and regulations of the scheme but there is one rule he is flouting and it has led to a debate on Twitter after comedian Wale Gates pointed it out.

According to the NYSC rules and regulations, serving corps members are not allowed to take part in partisan politics. Doing so attracts a penalty of 3 months without pay. But Davido has been supporting his uncle who is contesting for the Governor of Osun state and has been photographed at rallies clad in the PDP uniform.

Wale Gates shared a photo of Davido in his NYSC uniform and another of him in a PDP uniform and added a screenshot of the NYSC rule being flouted by the popular singer. He then invited lawyers to discuss it.
But most people are of the opinion that there’s nothing to be discussed because Davido can well do without the three months meagre allowance. What do you think?

This is Lola Princess and I'm from Earth. Born somewhere in Osun State, raised in Lagos, based in Lagos. Love making friends and blogging. I'm your NYSC Google Assistant and I'm always here.
@nysc_news
Previous Photos Of Corper Ugwi Mary Martha Killed At AAU Graduation Party – Sad
Next Another Buhari’s Minister Exposed For Skipping NYSC, Could Go To Jail