A promising Nigerian youth, who has been identified as one Ochoche Dickson Iduh, has been killed.

According to reports, Ochoche, who just completed his mandatory National Youth Service Corps (NYSC) program and served in Plateau state (Jos), met his untimely death where he went to show his discharged letter to his parents in the city of Otukpo, Benue state.

According to New-Nigeria Reporters, the deceased was killed along two others by unknown gunmen in Ojira Otukpo on Friday morning.

It was gathered that the deceased among the batch B stream 2 Corps members, had gone home to present his NYSC discharge certificate to his parents who are based in Otukpo before he eventually met his untimely death on Friday.

According to reports, the young graduate from Apa local government area of Benue State holds a Higher National Diploma (HND) in Business Administration from the Benue State Polytechnic, Ugbokolo. How sad! 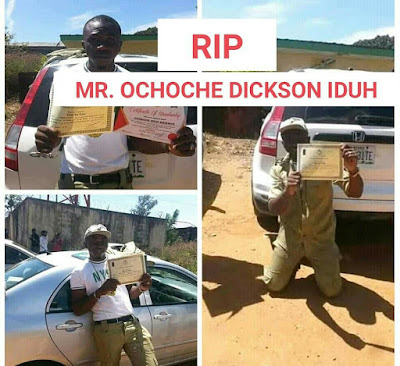 This is Lola Princess and I'm from Earth. Born somewhere in Osun State, raised in Lagos, based in Lagos. Love making friends and blogging. I'm your NYSC Google Assistant and I'm always here.
@nysc_news
Previous NYSC: National Service Or National Scam?
Next Why We Did Not Mobilize BSU Graduates For Batch C — NYSC