Creativity to the highest peak as a Corps Member Durodola Invents T-Smart Device To Fight Covid-19. In response to the challenge thrown to their creative ingenuity by the NYSC Director- General, Brigadier General Shuaibu Ibrahim, arising from COVID-19 pandemic, Corps Members have taken up the gauntlet, and continued to amaze Nigerians with so many inventions, tailored towards stemming the spread of the virus in the country.

In the past few months, some Corps Members across the length and breath of the country have come up with a number of inventions in response to the challenge thrown by the NYSC helmsman — thus, underscoring the centrality of the Scheme as catalyst for unity and national development.

Devices such as disinfection chambers, pedal- operated water, soap and sanitiser dispensers have been invented and donated to the Federal and State Governments, as well as some communities, as part of efforts by the National Youth Service Corps to battle COVID-19, which regrettably remains a formidable enemy that must be defeated.

Thousands of facemasks, liquid soaps and hand sanitisers have equally been produced and donated towards the cause. See also:This Fish Seller Who Celebrate NYSC POP With A Car Is Going Viral

However, it is heartwarming to note that Corps Member Taiwo Durodola serving in Nasarawa State has taken the fight against the virus a notch higher through the invention of T-Smart, a body-temperature reading device which undoubtedly will give a big boost to the current efforts to contain the virus in the country.

Interestingly, T-Smart does not require human intervention while in operation, and can be monitored remotely. It is highly sensitive and
accurate, with a resolution of 0.02 degree Celsius, which makes it possible to detect the smallest change in human body temperature.

In-built alarm system is another wonderful feature of the device which has been produced from locally sourced raw materials.

There is no gainsaying the fact that this invention, among other inventions of the Corps Members have the capacity of earning foreign exchange for the country, if patented and mass-produced.

Please share to show your support to this creativity and success. 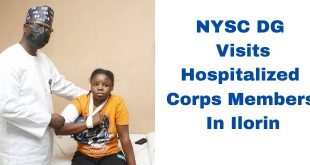 Updates On Name Correction By 2021 Batch A PCM & Corps Members